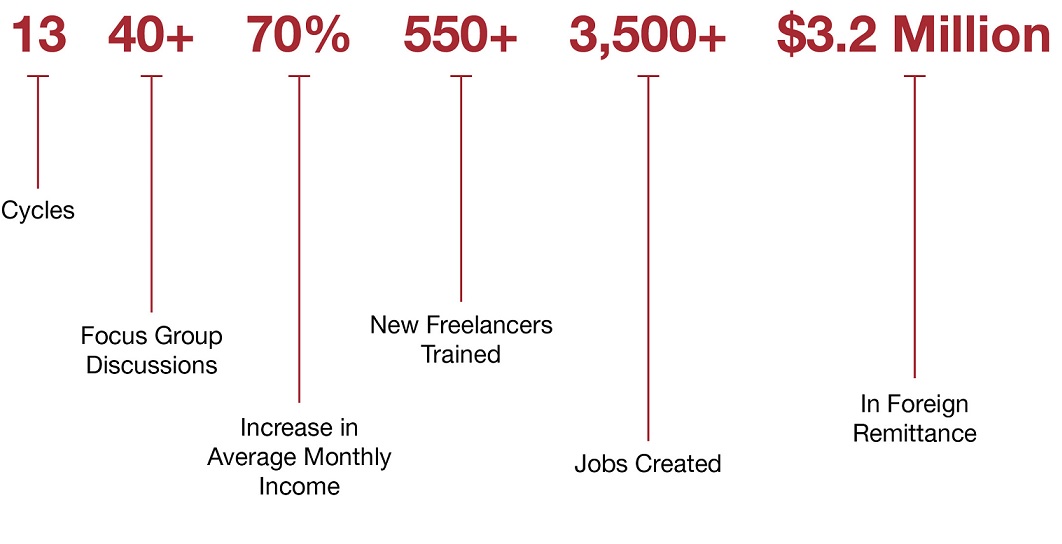 At TechHub Connect, freelancers are provided with office space equipped with dedicated internet service and uninterrupted power supply. In addition to this, regular trainings, workshops, seminars, conferences and mentorship programs are also organized for professional development of freelancers. Furthermore, freelancers are provided with much needed, international exposure and networking opportunities which help them connect with potential clients.

A Roundtable Conference, held twice a year, provides a platform to hundreds of leaders from the government, industry and academia to deliberate on issues pertinent to the IT industry. Major goals achieved over the course of four such conferences include the draft for the Punjab IT Policy 2017, Nationwide IT Census and successful advocacy for relaxation in broadband-related tax regimen.

TechHub Connect has also established a National Entrepreneurs Network (NEN) to foster communication and exchange of ideas among incubators, accelerators, co-working spaces, their managers, entrepreneurs, new ventures, and other stakeholders. The network is also acting as a gateway for collection and circulation of information about incubators, accelerators and co-working spaces to assist entrepreneurs with new business ideas.

TechHub Connect has also established partnerships with the ‘Global StartUp Awards’ (as Country Partner) and various local organizations. Furthermore, TechHub Connect has collaborated with ‘CrossOver’ as main organizer for its hiring tournament in Pakistan; with ‘Wordpress’ for conducting WordPress Official Meetups; and with ‘more’ magazine in pursuance of TechHub’s vision. Additionally, TechHub Connect has signed partnerships with two international co-working spaces: Esdip-Berlin and Hubud-Indonesia, and has hosted international delegations from Google and ATX+Pak.